Years ago, while teaching my way through college, I made a discovery so  powerful it became a lifelong passion. It began with a young violinist who  requested tutoring because he couldn’t read music. His school orchestra wouldn’t allow him to join unless he could overcome this obstacle. Unfortunately, I discovered this child seemed to have many obstacles: He had poor intonation, poor co-ordination, bad posture, and difficulty with memorization. In addition, he could not seem to comprehend traditional approaches to note reading. His frustration was so intense it caused him to incessantly pace our narrow lesson room. Yet, he loved music and desperately wanted to learn.

After exhausting all traditional methods of note reading, I decided to experiment. It occurred to me that encouraging him to create music, then helping him translate his ideas into notation, could be an organic way for him to approach note reading. So at his next lesson I introduced the idea of improvisation. I gave him very simple instructions: “Use first, second, and third fingers on the A and E strings. Play anything you want!” I turned and began to improvise on the piano.

What happened next challenged everything I thought I knew about music education. First, my student stood still; then he began to play – in tune, immediately and intuitively correcting his left/right hand co-ordination issues. All this was remarkable in itself, but what truly amazed me and sent chills up and down my spine, was the incredibly beautiful music passionately pouring out of this young boy. His musical ideas flowed with exquisite tone and expression. It was as if I found a magic key and unlocked a genius. Over time, this young man became a beautiful violinist and composer, writing for the very orchestra he originally couldn’t get accepted in.

This experience led me to question what we as educators were missing, if a boy so obviously innately talented could, and almost did, fall through the cracks. I came to the conclusion that there was no viable method for teaching creativity in music; and this boy suffered because he was an extremely creative child struggling in an analytical world.

I became fascinated with the idea of designing a pedagogy to unlock creativity in all children. After much research and experimentation I designed a method and named it Creative Ability Development (CAD). I realized early on that I was intuitively basing a lot of my pedagogical concepts on my experience with the Suzuki method. So I decided to take my ideas and visit Dr. Suzuki in Japan. Dr. Suzuki was fascinated with what I was developing and entreated me to continue my work so that someday ‘all children might compose’. He nicknamed me “Mozart’s Mother”, a high compliment I have been striving to earn ever since.

Composition as a goal became secondary as I and my fellow educators witnessed a new phenomenon occurring in CAD students. I was now teaching at the Third Street Music School Settlement in NYC where students who studied CAD for an average of three years were demonstrating a heightened and unique musicality. They were also demonstrating more fluid technique, better intonation, more powerful tone and a level of artistry clearly beyond their peers who were not studying CAD.

With CAD I discovered we could reverse that process: we could teach students to understand and interpret music through a disciplined intuitive immersion in the creative process. We could teach students the joy and purpose of music from the beginning of their studies; teach them to understand the language of music in a way that would allow them to express themselves as individuals.

Creative Ability Development is not meant to replace current methods of musical education; it is designed to be used alongside as an equal partner.  Without technique, it would be impossible to develop the creative side of musical ability: But without the development of the creative side, we will force students to become like museum pieces, holding up a tradition of imitation.

In 1995, just after the birth of my daughter I published the creative process theory, which became the basis for the Creative Ability Development Method and all subsequent books. The theory was based on writings by creative geniuses in many diverse fields. Here is the theory as originally published.

Conscious work involves many elements: setting up a problem, repetition of work on the problem, understanding the tools necessary to solve the problem, and exploration of different points of view.

Inspiration, the highest point in the creative process, occurs when the subconscious having reached a solution to the creative problem, communicates that solution to the conscious. It is characterized by a quality of sudden illumination of thought.  It will occur often without warning as a waking dream, complete or nearly complete in form, structure, length, etc. Inspiration occurs in the form of an answer to the problem, not a theoretical explanation of the solution.

Part four in the creative process, is the analysis or theoretical explanation of the inspiration. A certain structure of rules is necessary to begin a creative process.  Creativity builds upon itself as each new idea grows out of predecessors.  However, inspiration is the one truly new creation of the individual that cannot be explained except through the analysis of his work. Therefore, in the creative process this analysis is actually the only new theoretical work. The theory on which the inspiration had been based or begun would have been changed, subtly altered, or expanded to create a new theory.  New theory cannot exist without inspiration, and therefore follows.

What is the musical puzzle that has no right or wrong answer?  What musical puzzle can provide countless creative attempts to solve it?  The answer is a surprisingly simple one: Improvisation over a given harmonic structure:  The harmonic structure is the question; repetitive disciplined improvisation is the answer.  The puzzle or creative exercise is solved when the student feels ready to move on

You Can’t Teach Divergence, but You Can Facilitate It

Divergent teaching in music is a way to develop true musicality, as well as a way to create a well-rounded musician: One who could compose, interpret, and improvise all in a style uniquely his own.  So how does one facilitate divergence?

First, by letting go of the traditional model of the teacher.  In a divergent lesson, the teacher no longer has the right answers, or even the power to correct mistakes.  In divergent thinking, there is no such thing as a mistake!

Second, the teacher must create an environment for the development of divergent thinking; an environment rich in musical experiences and free of the concept of criticism.  Creativity is the art of choice.  Through the removal of criticism in the divergent environment, the student begins to look inward for choices.  In his own unique way, he begins the search for the best within himself.  Once he finds his truest vision he begins to share; and thus begins a new role for the teacher.  The teacher becomes a listener, not to offer criticism, but to fulfill the students’ need to communicate.

Third, the teacher must provide a means for discipline in the practice of the creative process. In the divergent realm, discipline refers to the repetitive practicing of the search for a solution to a creative problem.

In essence, the teacher must become a facilitator and a catalyst, but never a critic.  He must provide a rich musical environment for the students to experience.  He must provide creative musical problems for the students to solve, and encourage their disciplined practice of solving these problems.  Finally, he must cultivate his ability to listen without criticism, to hear with his heart, and to recognize and celebrate the emerging creative voice of the child.

Robert Frost said, “Two roads diverged in a wood, and I – I took the one less traveled by, and that has made all the difference.” Too often, the ‘road not taken’ in music education is the creative one.  We focus almost exclusively on the development of flawless virtuosic technique and rely on imitation of historic masters for expressive ideas.  We even have lengthy heated discussions regarding which master is best to imitate.  We forget it is the method of their inspiration and their intense creative seeking of a musical truth we should strive to understand and imitate.  This is the road less traveled, a divergent path in the convergent world of music education.

A keyboard based book for beginners of any age. It includes musical stories, fantasy pieces, and more.  Musical Improvisation for Children also includes games for children to play together, so it’s great for young group classes. This introduction to Creative Ability Development includes a CD for use with any kind of keyboard.

This newest addition to the series includes two recording discs for improvisational practice. With the end goal of creative fluency in all 12 keys, this single and compact book includes a wealth of animal-themed fantasy pieces, finger charts, and practice strategies for violin, viola, cello, and piano, making it perfect for siblings playing different instruments.

Intended for advanced players and professional musicians, Improvising String Quartets can be used with large or small combinations of instruments. This invaluable text is the primary resource for the widely acclaimed Creative Ability Development Tour Group at the Kanack School, whose students employ this book weekly as a warm-up and source of inspiration for more sophisticated improvised works. 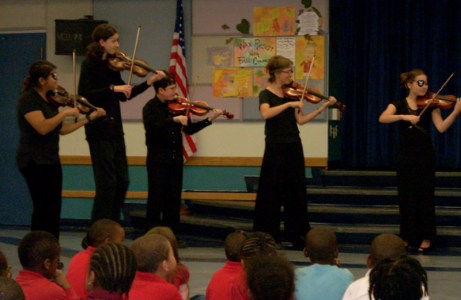 The CAD Tour group, based in Rochester, New York.

Editor’s note: To purchase any of the above books, and learn more about Alice and CAD, check out the following links!