In Part 1, NEC President Tony Woodcock explained his optimism for the future of music by listing several inspiring examples of individuals and organizations. This week, he continues that list in part 2.

Music is a healing art.

My friend Peter Renshaw of the Guildhall School of Music and Drama in London has written powerfully about the uses of art to combat isolation and dislocation in society in a “provocation paper” entitled Being–in Tune . He offers some compelling examples, including Blue Boy Entertainment based in East London which trains young talent using dance, and Barbican Drum Works also working in East London with young people aged 11-23. Each of these projects demonstrates how the arts strengthen self-esteem and self-respect, and break down feelings of alienation and isolation.

Closer to home, I think of the way our NEC musicians used their art to comfort and sustain Boston in the aftermath of the Boston Marathon bombings. Cellist Emileigh Vandiver and several musical friends set up “camp” outside Brigham and Women’s Hospital the very next day and played Mozart quartets for patients, medical personnel, families, police, and hospital staff. Others gave a special concert, Beethoven’s Eroica conducted by Charles Peltz, on Boston Common. And a few days later, there was a special concert, planned and promoted by our students (with help from Dean of Students Tom Handel) called MusicHeals – NEC plays for Boston at the Church of the Covenant on Newbury Street just a few blocks from the Finish Line. The program was simple, relatively brief, deeply felt and deeply moving. 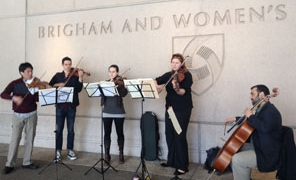 Music is a gift and musicians are coming to understand that.

I’ve been enormously heartened by colleagues who have shared with me their experiences or discoveries as musicians, teachers, students, and entrepreneurs that shed light on the new paradigms that are shaping the future of music. What I’ve discovered from them is that “music is a gift.” The blessings of the gift are multitudinous and multi-directional. And they are an optimistic harbinger.

Melissa Snoza, a flutist who is Executive Director of the innovative ensemble Fifth-House, crystallized this idea: “As we consider what it means to be a classical musician in a changing world, I would argue that one of the most essential lessons that today’s artists must learn is the most simple, yet the most contrary to the process that gets us here. In short, lose your Self…Music is a gift. I don’t mean a gift as in talent, I mean a gift — the kind you give to someone else with both palms open.”

As Melissa suggests, becoming an artist is very much an internal, inward-facing process and necessarily so. At the same time, becoming an artist can often become inextricably linked with ego, with personal ambition, with a developing sense of entitlement. Melissa’s work with Fifth-House has, however, changed her whole world view. “I am inspired by the children we see each week,” she relates, referring to the ensemble’s education work. “I haven’t gone hungry a single day in the last 10 years of my professional life. What does it take to build a career in music? Do what you love, in service of others. The greatest success can be found in the intersection between what fulfills you the most as an artist and what serves the needs of those who experience your art. Reach inside yourself to find the former, take the time to listen to discover the latter.”

Although many conservatories are engaged in such initiatives, I think with special pride of New England Conservatory’s Entrepreneurial Musicianship department. Directed by the dynamic Rachel Roberts, EM is dedicated to equipping students with the skills they will need to create gratifying musical (and non-musical) lives for themselves in the professional world. Along with classes, mentoring, and workshops, students have the opportunity to create and execute new projects through the EM Grant program–a funding pool for entrepreneurial ideas. I’ve been following several of the project leaders and have been dazzled by their creativity and successful achievement. Let me offer one example.

Consider Dan Gabel, a trombonist and band leader. When I met him for the first time, he was applying for an EM grant and I was struck by his larger than life personality, his bow tie, sharp jacket, the stentorian bass -baritone speaking voice, and the most amazing energy and sense of purpose, all directed toward one end–the American Big Band and the music of Tommy Dorsey and many others from that era.

Dan Gabel and his band outdoors

Dan discovered the sound of the big band from the movie Strike up the Band, with Mickey Rooney and Judy Garland (made in 1940) when he was 10, and he has never looked back. Before coming to NEC, he took time out to spend a year on the road with the Glenn Miller Orchestra, which took him to 46 states and Japan with around 310 dates. His eyes positively glow when he recounts the impact of this time traveling and playing. In 2010, he created his own band, the Abletones, an 18-piece ensemble, and he now leads, plays, writes, and arranges (the band boasts a repertory of over 2000 arrangements). (He also leads smaller versions of the ensemble: the High Society Orchestra and the Hot Jazz Combo.) To learn more, check out the band here.

Dan and the band have steady work and he credits his positive experiences with the EM team and NEC’s Community Performances and Partnerships for helping him become more businesslike by focusing on his goals, developing his personal style and sharpening his organizational savvy.

Musicians are imagining new kinds of careers that embed them in their communities.

Here is one example: the Mercury Quartet, a student ensemble supported by NEC’s Entrepreneurial Musicianship program and Quartetutopia, a project of our chamber music department and the Borromeo String Quartet (NEC ensemble in residence). Composed of Michael Rau, MuChen Hsieh, violins; Sergio Munoz, viola; Seth Russell, cello, the Mercury has served this year as a laboratory for experience and development, directed to the community. In residence at an El Sistema-inspired program in east Somerville, the group helps with music lessons, teaches chamber music electives, coaches a student quartet, and plays with the youngmusicians in the orchestra. The quartet believes they are learning major life skills that will shape their future careers as musicians. The program has allowed them not only to grow as a musical ensemble engaging with a rich wonderful repertoire, but has also presented them with the challenges of partnerships, planning, marketing, proposal writing, teaching, logistics, and management.

Their interaction with the kids in the Somerville program (third through fifth grade) has brought them joy but also tested them. An ongoing quandary is how to get youngsters to love music. How do you help them enjoy playing the cello (or the violin or the viola) when a beginning string player’s sound is so bad for so long? So they play for the kids. They demonstrate their love and commitment and the beauty of sound that can be achieved, and the excitement of hearing and touching music. The reward, though, is the relationship that is established. After an initial period of nervousness, a bond is created, linking the young musicians to an even younger generation.

Tony Woodcock has served as President of the New England Conservatory of Music since 2007. Check back next week for the final part of his blog!