I recently received a master’s degree in music.  That means I am qualified to tell you how to play  bassoon, how to construct different musical forms, or what was going on in the world when Shostakovich wrote his ninth symphony.  Most of the topics that I can ramble on about are boring and irrelevant to a listener or friend that has not gotten his or her own sparkly master’s degree in bassoon performance.  I’m sure anyone with a specialized degree has felt the cold, hard wall that seems to exist between people of different specialties and interests.  And when we are asked to talk about our specialty in front of a group that does not share the same base of information that we do, we can sometimes make the mistake of pandering or talking down to the audience and adding more bricks to the wall.  The concept I’d like to explore is based on my  eye-opening first year working with Fifth House Ensemble: communicating one’s knowledge effectively.

Knowledge can do many things, but at its most basic, it can separate us or bring us together, sometimes simultaneously. While years of studying Shakespeare allows you to connect with Renaissance theater specialists and Shakespeare enthusiasts, it can separate you from the kid that is thinking about playing Minecraft in a onesie after he leaves the assembly hall. How does one reach this kid?  It starts with the willingness to find a common connection.  I have seen people from all ages using knowledge to separate themselves from others.  This separation is not always a conscious choice, but when one has a vast understanding of a subject, it seems difficult for that person to be able to speak in a language that an audience finds appealing, yet still informative.  Knowledge is most welcoming when it is paired with a genuine desire to connect.

I’ve had some great mentors along the way that have helped me tap into the idea of connecting my musical  knowledge to my other interests in order to make the way I talk about music more engaging to a wider audience.  Eric Snoza is Fifth House’s double bass player, photographer, website designer, and fashion consultant, and I’ve had the pleasure of working side by side with him in the classroom.  Watching him make eloquent off-the-cuff connections between various musical concepts and relating them all back to the main point has encouraged me to begin using my own knowledge to make connections while teaching.  To test whether the explanation of a concept or activity is effective or not, Fifth House Ensemble asks the following: “could you describe it to your grandma?” This was a foreign concept to me – contrasting the academic approach that I was accustomed to from my schooling – because now the goal of explanation had shifted from defending myself intellectually, to sharing knowledge efficiently; grandma doesn’t have time to listen to me say “pivot-modulation” again. 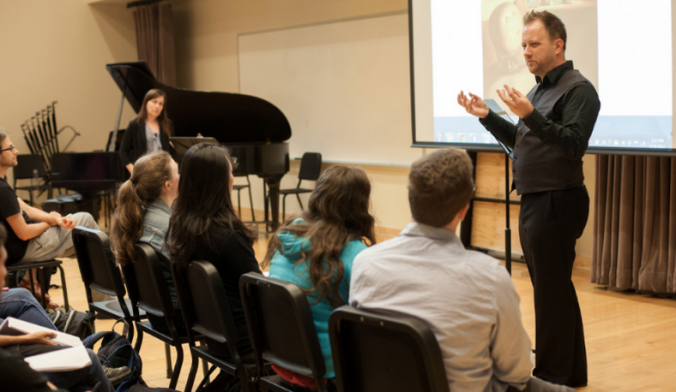 In Fifth House Ensemble, we often integrate our current musical repertoire with the school’s current curriculum, working closely with the teachers to create a lesson plan that will accomplish an educational goal.  We have had huge success over the years teaching literature lessons with music as the vessel for carrying knowledge into students’ brains.  One of my favorite activities that we do with students is the culminating activity of our Music Can Tell a Story curriculum, where we perform the soundtrack for a “Choose Your Own Adventure” story that the students create.  The students pick a character, plot, dialogue, etc. based on the music that we play, and we then adjust the way we play the soundtrack in order to better reflect the students choices.  For example, a sparkly fairy sounds totally different than a majestic grey-haired wizard, despite how many times they have gotten confused for one another during assemblies.

I can’t wait to continue my work with Fifth House Ensemble in the Chicago Public School classrooms this fall, and I strive to synthesize my knowledge of music and TV shows like Adventure Time and the G.I. Joe Public Service Announcements to better engage and teach students.  Knowing is half the battle. The other half is communicating.