In 1999, as I turned 40 years old, I was thinking a lot about making the second half of my life meaningful.  I had observed that the greatest musicians I had worked with (YoYo Ma, for example) or the greatest historical musicians (Fritz Kreisler, Pablo Casals) were all great human beings – full of love and empathy for others.  The mission statement of a new organization came to me  – born fully grown, like Athena leaping out of the head of Zeus:  “Develop the Gift of Music, Acknowledge God as the Source of the Gift, and Respond in Service to Others.”

This new organization, which I named Credo, was intended to start as a summer chamber music program focused on the highest level of performance, combined with serving others with music and physical labor.

Within weeks of incorporating Credo, I was invited to join the faculty of Oberlin Conservatory. The Oberlin ethos was at one time summarized with the expression “Do you think one person can change the world?  So do we.”

As I look back over what has happened with Credo in our 16-year history, I am convinced that anyone with a good idea, a passion and determination to succeed, and great friends can indeed leave the world a significantly changed place.

Credo is a complex amalgam that could be best described using the words: excellence, love,intensity, fun, accountability, friendship, devotion, and joy.  Check out our web presence at Credo-music.org to see the array of programs all built around our mission statement.  Or you might want to watch this short video:

Credo has accumulated about two thousand alumni, who range in age from 10 years old to mid-thirties.  They hail from 40 states and about a dozen foreign lands.  They populate principal chairs in youth orchestras, at major conservatories such as Oberlin, Eastman, Colburn, etc. They have participated in Credo “mission” trips to Los Angeles, and generated their own trips in response to the Japan tsunami and the Haiti earthquake.  They come from a variety of backgrounds, but are united in their belief in music as a significant agent of positive change – and a voice for powerful messages from a God that is greater than we can conceive. 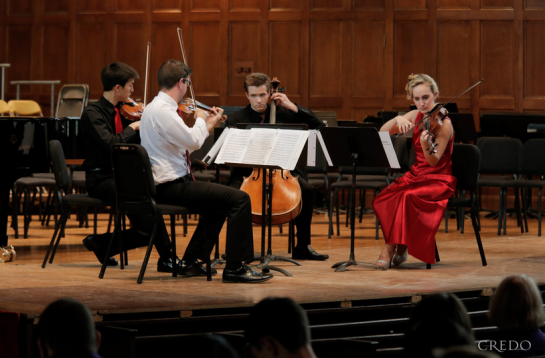 In 1999 we started with 27 students, for two weeks in Woodstock, Illinois.  In 2015, we’ll have about 80 students for 3 weeks at Oberlin Conservatory, another 50 for chamber music in Chicago in July, about 25 at a Flute Intensive program, another 40 or so playing the Brandenburg Concerti in Orchestra Hall, Chicago, and Severance Hall, Cleveland.  As I write this, I’m in Brisbane, Australia, where I’m just completing two weeks of Credo activity here that touched several hundred students here and in Sydney.   Additionally, we have several hundred individuals and families from around the world that follow our Credo blog at Credo-music.org/blog.   We’re excited to see what the next 15 years bring – growth seems to be exponential in the world of Credo!  We’re thrilled that what started with one crazy person (me!) has so many people working together to change the world.

So, my message to you is – whatever your vision, whatever your passion with music – pursue it with all your heart and energy.  Based on my experience, YOU can be a person who changes the world!

Peter Slowik has devoted his life to sharing his passion and understanding of music as a performer and teacher.  In addition to his current positions as Professor of Viola at Oberlin Conservatory and Artistic Director of Credo, he’s taught at Cleveland Institute, Eastman, Indiana University, and Northwestern University, and performed with Chicago Symphony and with numerous notable chamber music colleagues.