London in the summertime is gorgeous. The weather has been amazing, around 70 degrees every day this past week, and it’s barely rained despite its reputation for being gray and wet all the time. Of course just as it’s warming up I’m getting ready to leave, but I’m trying to soak up every ounce of London sunshine that I can.

This past weekend I crossed two things off my London Bucket List in one day. I started out the day visiting the famous Abbey Road crossing with a friend of mine and ended the day by attending an organ recital in another Abbey, Westminster. Abbey road was just as I expected it to be. There were a bunch of tourists trying to take their pictures while the locals just honked their horns in anger at them for holding up the traffic. If I lived in that area I’d probably avoid the street at all costs, but that day I was excited to be acting as the tourist. As cheesy as it sounds it actually felt amazing to cross that street. It’s really just a crosswalk, and if you didn’t know any better you wouldn’t even notice it next to all of the other crosswalks in London, but I’m glad I got to see it. It took me almost six months, but I finally walked in the footsteps of John, Paul, George, and Ringo. 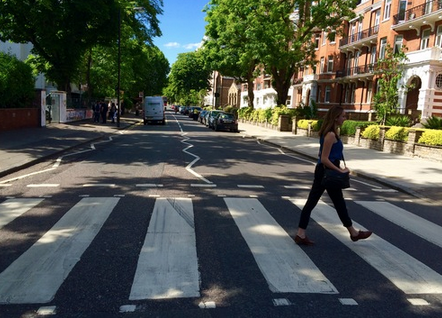 After saying goodbye to my friend I decided to go over to Westminster Abbey to watch the choir sing. Unfortunately I didn’t realize that the choir sang at 3 pm instead of 5 because it was the weekend, but I was lucky enough to catch an organ recital by a very talented man named David Goodenough. He played four pieces, but my favorite had to be “Elegy in B flat” by George Thalben-Ball. I’ve seen a couple of organ recitals before and usually the pieces played are very loud, but this piece was eerily quiet. Goodenough made the organ sing and it should have been a very peaceful moment for me listening to him play, however the woman next to me was fanning herself obnoxiously through the entire performance. I think towards the end it was just to spite me, it wasn’t even hot in there! Hopefully I can make it back to hear the choir sing before I leave though because the inside of Westminster Abbey is beautiful and I can’t imagine how angelic a choir would sound in the hall.

With only three more weeks left I’m starting to think about packing up and getting ready to come home. My London Bucket List has so much crossed off and only a few things still left to see. If I don’t get to everything, I guess that’s just another reason to come back though!