For the purposes of reflection and inspiration, there are few places in the northeastern United States as ideal and idyllic as Crane Beach in Ipswich, Massachusetts. With miles of shoreline welcoming the Atlantic tides, under the protective gaze of the verdant Crane Estate with its Castle Hill mansion and adjacent wildlife refuge, one can feel humbled considering the countless grains of sand under one’s feet, the blades of grass on the half-mile-long manicured lawn called the Grand Allée, and the drops of water in the expansive blue ocean.

It was in this location one day in 1979 that Susan Robbins was visited by an idea. An experienced and gifted singer and musician with a background in classical and early music, Robbins was in need of a new artistic path.

“I was at a transitional moment in my life and I was getting tired of the repertoire,” she says today, “all of which, of course, was written by male composers. I came of age as a feminist in the late ’60s and ’70s and I began to wonder what kind of music women were creating. Then the light bulb went on: I decided to gather together a group of women who were interested in discovering women’s music around the world.”

In October that year, 25 women gathered together in Cambridge and began to give voice to music that was either undocumented, unrecognized, hidden, or – in some cases – suppressed, the music that women made not for entertainment or profit but to accompany, enrich, and give meaning to their lives. Thirty-five years later, Libana (now a sextet but still brimming with passion and commitment) is still celebrating the women of the world through their songs, dances, and stories. 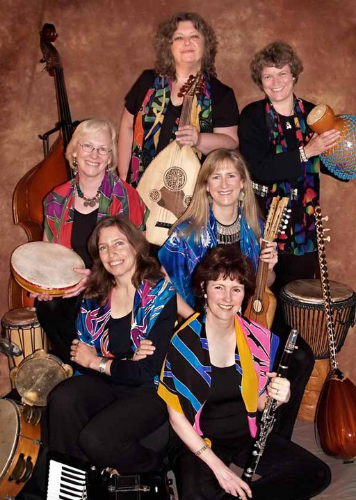 A world of discovery

Old, new, East, West, the music that Libana unearths and painstakingly learns has rarely if ever been performed on stage for an audience until Libana does so. (Just consider the challenge in mastering musical works in so many different languages and non-Western scales, and especially songs and dances from cultures that favor oral tradition over musical and choreographic notation.)

“In many places, women’s music serves a utilitarian or spiritual function,” says Marytha Paffrath, a member since 1981. “It’s always had a purpose, based on family, farm, home, community, rituals. It’s not necessarily for public consumption and we believe that in that hiddenness there is a power.”

Libana take their name from a 10th-century Moorish poet, philosopher, and musician. Their musical mission has taken them from Cambridge to Bulgaria, Morocco, India, Greece, and throughout North America. Though their profile here and abroad is modest, in their target communities they have an impressive reputation. Libana’s recordings have been used by music educators, classroom teachers, choral conductors, in places of worship, and among those involved with earth-based spirituality and healing work. And when the group visits women in their native countries to learn new material, they are warmly welcomed and appreciated.

“We were asked to perform at a world music festival in Tangier in 2013,” says Robbins. “We performed the ‘Zar’, a healing dance that appears in different forms all over North Africa. As we began ululating at the start, all the women in the audience joined in. At the end we got a standing ovation. It was one of the most powerful performing experiences we’ve ever had. We were offering their tradition from the stage, respectfully and authentically, and that came across to them.”

To date, Libana has released nine albums; though the group has gotten smaller over the years, their focus remains as broad as earth. In addition to Robbins and Paffrath, today’s Libana features founding members Lisa Bosley, Linda Ugelow, and Cheryl Weber, as well as Allison Coleman, who has been with the group since 1990.

“Frankly, we’re astonished that we’ve lasted this long,” says Paffrath. “I think the key is that we’ve allowed Libana to be part of our lives, and let our lives be part of Libana. At this point, we don’t know life any other way, and I mean that in the best way possible. Libana is as much a part of our lives as any long-term relationship.”

“We’re a long-term creative community,” adds Robbins. “We do what women’s communities do: we go through life cycles together, we support each other as parents, we mourn and celebrate together, and we work together. Rarely does our commitment to Libana feel challenged because we get so much out of it.”

When Libana formed in 1979, Robbins wasn’t thinking about the group being a touring and recording unit. Yet on November 14, 2015, at First Parish in Cambridge Unitarian Universalist Church in Harvard Square, Libana will give its 35th-anniversary celebration concert. Combining old favorites with new repertoire, the event promises to be a special experience for the group’s longtime fans and the ever-increasing numbers of new young listeners attracted to these “accidental diplomats,” as Paffrath describes the members of Libana.

“It’s been quite a ride,” says Robbins. “I look at some of our early pictures and they are evocative of a particular time in the world. A heady, open time when everything seemed possible. Social change was going to happen. Women’s creativity would be as honored as men’s creativity. We all have grown and evolved and matured and deepened our perspectives, but we’re still carrying on that belief that through arts and music and creativity and spirit, we can create a world that is more kind and friendly and just for everyone.

“I just had a question,” she adds, referring back to that day at Crane Beach in 1979, “and we’re still answering that question. There are many cultures yet to explore and we’re exploring them. We’re all really proud of that.”

If you’re in the area, tickets to the anniversary concert can be purchased at brownpapertickets.com/event/2215248 and at the door. A reception with the group will follow the performance. For more information on Libana’s music, visit their website at www.libana.com.

One thought on “A Circle Is Cast: After 35 Years, Libana Continues to Discover and Celebrate the Music and Dance of Women From Around the World”