“When my mother died, the music stopped in my house,” said Isabel Heredia.

Her mother wasn’t a professional singer.

“But she had a fantastic voice. She sang at parties.”

Isabel enjoyed singing with her mother at their house in San Francisco but didn’t do any formal singing herself as an adult, although she had been in a choir as a girl in Cuba. Alzheimer’s clouded her mother’s last years, making life hectic for Isabel, who was her mother’s primary caregiver.

“I retired just after my mother died. Then I started getting lazy,” explained Heredia, who had been a Spanish teacher. “I was so busy and worried when my mother was ill that I just let go, watching TV and being passive. That’s detrimental to your health. For people who live alone, the worst thing is to spend the day in your pajamas. You think about going out, but then you watch TV. Not talking with people every day after working two jobs for years, is not good. You need an activity that is constant every week so you will get up, get dressed, and get out.”

She was overjoyed when she heard from a friend several years ago about the chance to join a community choir for free, as part of the Community of Voices study that was being run by the University of California San Francisco. The study aimed to see what impact singing in a choir would have on the quality of life for older adults, particularly those from diverse cultural backgrounds who hadn’t recently been in a choir. The study set up twelve choirs in senior centers and community centers around the city. A music school, the San Francisco Community Music Center, worked with the university to create the project and provided teachers to lead the choirs, which sang in English as well as in Spanish and Tagalog.

“This was tailor-made for me,” said Heredia. “I wanted to sing in Spanish! I already knew a lot of the songs—folk songs, oldies, classics”—songs she had loved singing with her mother. She joined one of the choirs, after first completing an assessment that all study participants had to do: memory exercises and tests of physical, mental, and emotional health. “They did the tests every few months to see if there’s progress. I didn’t mind. I just wanted to sing,” explained Heredia.

“This has been fantastic for me,” she said.

She was doing something she loves that gave her a reason to get out of the house and make friends. “If you don’t go, they call you: ‘Where were you? What happened?’ You learn a new song every week. You start learning faster after a while. They do exercises for breathing and rhythm—very beneficial.”

She and other choir members loved the choirs so much that the music school found funding to keep all twelve choirs going—tuition-free—after the study ended. A Google Impact Challenge grant helped for one year. Then the school cobbled together funding from local government and social services sources, and from non-profits and private donations. Now, more than 350 older adults sing with the school’s thirteen tuition-free choirs, including a new one at a hospital and rehabilitation center. Heredia, now 80, still sings with the choir she joined for the study, as well as with another choir. “I do other things, too. I take classes. I go to concerts and the ballet with people I meet at choir. Singing is an expression of joy—that also gives you joy.”

The NIH-funded Community of Voices study, one the first randomized controlled trials of a choir intervention, is now completed and its findings, published recently, note that for adults age 60 and over who had not been regular choir members before the study, singing in a choir reduced feelings of loneliness and increased interest in life, compared with similar adults who weren’t in a choir. Other research has found that high rates of loneliness, social isolation, and depression among older adults can cause health problems.

Choirs offer a relatively easy way to develop novel approaches to help older adults stay engaged in the community. There are few requirements for joining other than a willingness to try singing. There are no instruments for participants to buy and learn, as with a band or orchestra.

Some choir members felt at first that they couldn’t sing, but with patient encouragement from the choir directors, “somehow it all works,” said Mary Cunningham, who was in the same choir during the study as Heredia and continues to sing with that group.

“I can carry a tune but never thought I was good enough to be in a choir,” Cunningham explained. “But really, you can sing if you want to. The choir leaders take us where we are and bring us along. They never make anybody feel they’re not doing it right. Their message is: ‘We’re here to enjoy singing, enjoy each other, and strive to be the best that we can be.’ We perform at senior centers and street celebrations. I’m grateful that the choir exists for me at this time of my life.”

Now that adults age 65 and over are the fastest-growing segment of the U.S. population, choruses for older adults are springing up around the country, as noted in the book Making Time for Making Music.

In addition to the choirs in San Francisco, New Horizons International Music Association and Encore Creativity for Older Adults offer choirs especially for seniors in a number of locations. Multi-age choruses at music schools and religious organizations may also welcome singers of all ages and abilities.

For communities that do not yet have a choir for seniors, the University of California San Francisco has created a Community of Voices how-to manual available free online. Written by the researchers and music school staff who created the San Francisco choirs, this manual covers all aspects of starting and funding a choir for seniors. It also has practical advice for older singers and quotes an encouraging African proverb: “If you can walk, you can dance; if you talk, you can sing.” 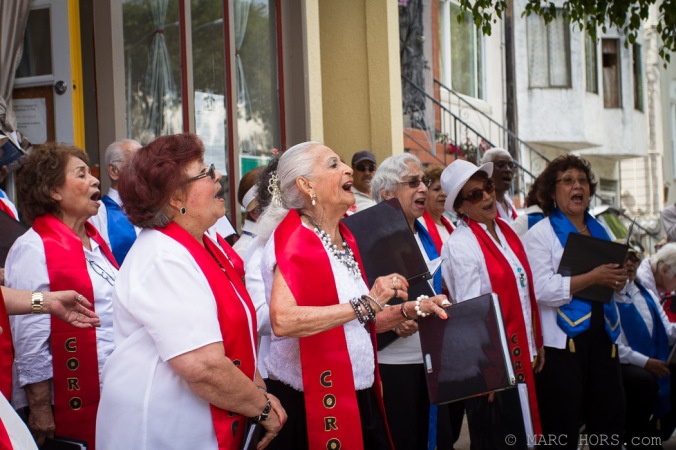 Lupe Bravo agrees. She dances at her senior center and still sings with the choir she joined for the Community of Voices study. “I always wanted to be in show biz,” she says. “Finally I got to do it in my 60s to 80’s.”

Amy Nathan, an amateur pianist and choral singer, is an award-winning author of nonfiction books for adults and young people, including three books for Oxford University Press: Making Time for Making Music: How to Bring Music into Your Busy Life;The Music Parents’ Survival Guide: A Parent-to-Parent Conversation; and The Young Musician’s Survival Guide. A graduate of Harvard with masters degrees from the Harvard Graduate School of Education and Columbia’s Teachers College, she is the mother of two musical sons: her older son is composer Eric Nathan; her younger son is a saxophone-playing political scientist.

This article is adapted from one that appeared on March 27, 2019 on the Oxford University Press Music Blog